There are many ways of understanding the two words opening this phrase. The one I relate to is ‘Lech Lecha’, Go to yourself, follow your inner self, discover it.

David Ben Gurion, was born in Poland and made ‘Aliya’ (immigration to Israel) in 1906. He was a Zionist activist, joined the Kibbutz and the Jewish defense movement and acted as head of the World Zionist Organization and the Jewish agency. He declared the State of Israel and served as its Prime Minister and Minister of Defense. He had a dream to settle the Negev and consequently he asked to be buried there, at Sde Boker.  When I first saw Ben Gurion’s tomb I was surprised there was not a long list of his great achievements rather, on Ben Gurion’s grave, there is one sentence describing his highest achievement: ‘Made Aliya in 1906’

A long journey starts with one step. 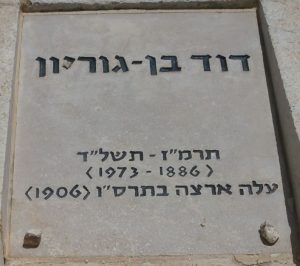 Hanna Szenes, was a young paratrooper who risked her life to save other Jews during WWII and is an inspiration to generations. What brings a young girl, who was safe in Israel after leaving Europe in 1939, to go back to Europe on a mission that had great risk? Why would she volunteer, putting her life in danger for lives of people who were probably strangers? Szenes wrote several poems, one of them opens with the following words ‘A voice called and I went. I went for it called’.

Our history as a nation is made of people, who followed their dreams, followed the inner voice that called them.

From the heroes of the Bible like Elijah and Ruth who followed their call, to the modern heroes who still follow that call and live up to their dreams.

Abraham as our father got up and left, he went to discover the Promised Land and left us an inheritance:

The ability to listen to that voice.

After a visit to Masada we sailed the Dead sea🛥

@dig_for_a_day, a fun experience for all ages. I r

Enjoyed walking through the art galleries in Jaffa

Today is the first of the month of Shvat. Middle o

My guests this week are two fun families from NY w

Went to Hebron to get some spiritual charge of ene

This family loves the outdoor, so to be safe in wi

Together with a few colleagues I participated this

Have you written your review? Apparently this is a

Religion. Politics. Money - not sure about the ord

Special Hannukah lights were put up in Jerusalem w

November 29, 1947 was celebrated by the Jewish com

A magical day in Jerusalem. Start with putting a n